The day after your “cheat day” is one of the most important situations you have to deal with.  We ultimately have two choices: let is snowball out of control, or get back on track.

You know which of these two options is best, but without a plan in place it can be easy to let one cheat day turn into two…which can easily turn into getting off your diet/nutrition plan for a week or more.

We need to stop this monster in it’s tracks before we lose control!

So, here are my best tips to getting back on track after you cheat on your diet.

Understand What a Cheat Day Is, and Isn’t

While a “bad” cheat day definitely can set back the progress you’ve been making, it won’t have drastic results if you don’t let it.

As you can see in the chart above, one day of “bad” eating only slightly raises your weekly average.

Could this place you in a caloric surplus for the week?  Yes, it absolutely could.  However, the surplus wouldn’t be large enough to cause any major changes in your physique.

Understanding this should help prevent you from having a psychological melt down thinking that you “ruined” an entire week (or more) of dieting with one cheat day.  That’s simply not the case.

Unplanned cheat days don’t usually happen for no reason.  There is usually something that caused you to deviate from your diet like stress, lack of preparation, unexpected travel, etc. that throws a wrench in your nutrition plan.

One of the best things that you can do is evaluate what caused this cheat day to happen.  It’s usually not because “you were hungrier than normal.”

Common reasons could be a conflict at work, an argument with a family member, an unexpected bill, or some other form of bad news.

If you can identify the root cause of why you cheated you’ll be much better equipped to handle a similar situation in the future.

Try to look back at why you cheated with a fresh set of eyes a few days later and come up with an alternate plan when a similar situation presents itself in the future.

Then, you’ll be able to make better decisions in the future whenever those stressors seem to rear their ugly heads!

Drinking lots of water will help flush your system and speed up the process of returning your body to a normally hydrated state.

*When I say large amounts of water, I don’t mean drink in excess.  There’s no need to drown yourself or even risk hyponatremia. (where you basically dilute your body and your electrolyte balance is very low)  Simply drink to thirst and then slightly more.

Also, there’s something that just “feels healthy” about drinking lots of water so this will help get you back on track physiologically AND psychologically.

If you went crazy and ate an extra 2000 – 3000 calories it is impossible…repeat, impossible…to burn them all off the next day so don’t even try.

Get back in the gym, and resume your normal routine, but do not over-do it.

The only thing that can do is start an unhealthy spiral of events.

You might feel like hitting the gym hard and putting all of those extra calories (probably from carbs and fats) to use, and there’s nothing wrong with that.  Have at it!

Just don’t feel like you have to cram an entire week of workouts into one day.

I believe the best solution is to immediately get back into your normal routine and get back to your old habits that usually work for you.

You know what you need to do, so do it!

You just had a cheat day…you know you messed up.  Why kick yourself while you’re down?

Getting on the scale first thing in the morning is just going to add insult to injury…so don’t do it!

If you think that there is even a possibility that seeing a higher number on the scale is going to have a negative psychological effect on you the best solution would be just to avoid it completely.

This is especially true if you don’t weight yourself regularly.

If you do weight yourself regularly, and you keep a weight log, then go right ahead.  This may be an opportunity to see exactly how “bad” the cheat day was, and help you plan for the future.

But, if you just want to hop on the scale to see how much weight you gained there isn’t much positive that’s going to come from it.

The best thing to do is to wait a few days and let your body normalize again and then weigh yourself.  This will give you a more accurate representation of how your body responded to the high calorie day rather than just measuring your weight when it spikes.

Don’t be confused by what I mean by “move more.”

I’m not suggesting that you add an extra hour of cardio into your routine…that’s not necessary.

“Move more” simply means that you should try to have an above average day with your NEAT. (Non-Exercise Activity Thermogensis)

So, while I’m not suggesting adding a treadmill session, I think it’s a really good idea to try to:

The purpose isn’t to try to burn off all of the extra calories that you ate, it’s simply to help you feel better.

After a cheat day you’re probably feeling bloated, retaining more water than usual, and possibly still feeling full…or some combination of the three!

Moving more will help you feel better.  And, as an added bonus, you will burn slightly more calories than a normal day.

You had a bad day.  It’s over.  Tomorrow is a fresh start.

Don’t beat yourself up, just get back on track and a week from now you will have forgotten all about it…unless you had Girl Scout Cookies or a Blizzard from Dairy Queen.  And in that case I would suggest that try your best to remember it because both of those are delicious. 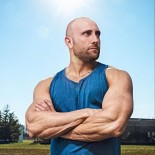 Former professional athlete. Trying to find the balance between bulking and cutting. Have never said "no" to an Oatmeal Creme Pie.